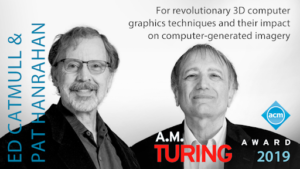 Ed Catmull, computer scientist and former president of Pixar and Disney Animation Studios, and Pat Hanrahan, a founding employee at Pixar and Stanford University professor, received the 2019 ACM A.M. Turing Award for fundamental contributions to 3-D computer graphics and the revolutionary impact of these techniques on computer-generated imagery (CGI) in filmmaking and other applications. They presented their Turing Lectures, “Shading Languages and the Emergence of Programmable Graphics Systems” and “The Wild, Unexpected, Exponential Ride Through Computer Graphics,” at SIGGRAPH 2022. 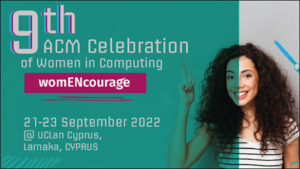 Initiated by ACM-W Europe nearly 10 years ago, womENcourage aims to connect women from diverse technical disciplines and encourage them to pursue their education and profession in computing. And in 2022, womENcourage invites the Arts to join the celebration! The theme of this year’s celebration is “Drawing New Lines in Science.”

The 9th ACM Celebration of Women in Computing: womENcourage 2022 recognises that both the Arts and STEM (Science, Technology, Engineering and Mathematics) share a focus on creative thinking, problem-solving and experiential, immersive learning, exploring the ways in which the Arts relate to STEM, often referred to as STEAM (Science, Technology, Engineering, Arts, and Mathematics). This event will be held in Larnaka, Cyprus with the option of delivering presentations online. 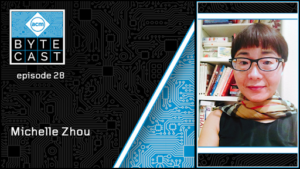 ACM ByteCast is ACM’s series of podcast interviews with researchers, practitioners, and innovators who are at the intersection of computing research and practice. In the latest episode, host Bruke Kifle is joined by Michelle Zhou, Co-Founder and CEO of Juji, Inc, the maker of the world’s only accessible cognitive AI assistant.

Zhou presents five inflection points that led to her current work, including the impact of two professors in graduate school who helped her find her direction in AI. She explains what no-code AI means, why the ability for users to customise AI without having coding skills is important, and she responds to the critics of no-code AI. Kilfe and Zhou then delve into the inception of her AI company that develops AI assistants with cognitive intelligence, Juji, and how it is being used as a platform to introduce AI to early education. Finally, Zhou shares thoughts on the future of software and the no-code movement, as well as the future of AI itself. 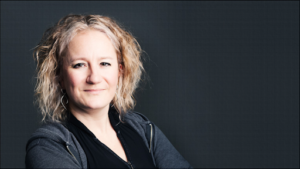 danah boyd (stylised) is a Partner Researcher at Microsoft Research. In 2013, she founded Data & Society, a non-profit research organisation that studies the development and governance of new technologies. She is also a Distinguished Visiting Professor at Georgetown University. For over a decade, her research focused on how young people use social media as part of their everyday practices. More recently, she has conducted research to understand how contemporary social inequities are shaped by data and algorithmic technologies. In her interview, she discusses her research on social media networks and their effect on teens, equity in data, and the role of governance in technology. 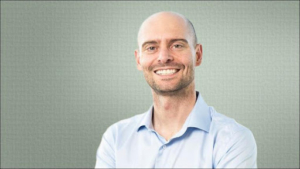 Pieter Abbeel is a Professor at the University of California, Berkeley, where he is Director of the Berkeley Robot Learning Lab and Co-Director of the Berkeley Artificial Intelligence Research (BAIR) Lab. He is also Co-Founder, President, and Chief Scientist at Covariant, an AI robotics company. Abbeel pioneered teaching robots to learn from human demonstrations (“apprenticeship learning”) and through their own trial and error (“reinforcement learning”), which have formed the foundation for the next generation of robotics.

Abbeel is the recipient of the 2021 ACM Prize in Computing for contributions to robot learning. In his interview, he discusses some of his significant breakthroughs, AI learning in robots, and offers advice for aspiring AI researchers. 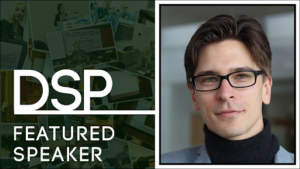 Tarek R. Besold is an experienced researcher, innovator, and communicator at the intersection between Artificial Intelligence and Cognitive Science, working on a broad range of topics from trustworthy AI (including explainable AI and privacy-preserving AI) to cognitive systems and computational creativity. Besold holds positions as Chairman of the German Institute for Standardization (DIN)’s National Working Group on Standards and Norms for AI and as a member of the AI Expert Council of Microsoft Germany. He serves as Editor-in-Chief of Cognitive Systems Research (Elsevier) and is a frequent reviewer for high-profile AI and Cognitive Science conferences and journals.

His lecture topics include “Creativity Computational and Otherwise –The Science and the Fiction,” “Developing Trustworthy AI for the 21st Century—An Applied View,” “Developing Digital Solutions to the Mental Health Challenges of the 21st Century,” and more. He is available to speak through the ACM Distinguished Speaker Program.