The history of computing is not universal, but instead is locally bound. This principle of the history of technology was at the core of this year’s workshop of IFIP Working Group 9.7 – History of Computing. Inspired by the Polish conference venue, the group focused on the history of computing in Central and Eastern Europe as part of the World Computer Congress 2018 in Poznań. Speakers searched for an alternative to the well-known US-centric master narrative, which has been questioned in recent years.

For the 24th time, the International Federation of Information Processing (IFIP) organized its World Congress in September 2018. As a part of it, TC 9 organizers chose a historically significant topic for their Human Choice and Computers Conference: “This changed everything”. What is the impact of information technology and how can humans deal with it? 9.7 members asked for papers that explored these changes and continuities in the former Eastern Bloc. Not only the host country was well represented: In addition to historians of computing from Poland, contemporary witnesses, museum directors and scientists from Hungary, the Czech Republic, Armenia, Latvia, Germany, the United States, and Russia participated.

Delegates provided unique insights into the history of computerization of Central Eastern European countries. Topics ranged from the disciplinary development of computer science in Hungary and Czechoslovakia, early development of computer technology, knowledge transfer through the Iron Curtain as well as within the Comecon, to questions of personal computers in the 1980s. The concluding panel finally addressed the question of how the history of computing can be presented in museums today. The presentations formed a fascinating panorama of a socialist information age. It is important to evaluate the state of computing in Eastern Europe not only by predefined Western categories, but also on the basis of their own right, culture and requirements. Delegates largely based their presentations on previously unknown material.

Among many highlights were presentations by Vladimir A. Kitov, a Soviet computer scientist and director of Gosplan’s former main computer centre. He offered insights into the history of Soviet computing until now difficult to obtain. Through his work on Monolith, a secret research institute of the Soviet military in the 1980s, he was able to present valuable information about the state of computer technology in the Soviet Union. Also, as an individual he represents a fascinating combination of leading computer research in the Soviet Union: He is the son of the well-known Soviet cyberneticist Anatoly Kitov and married to the daughter of the great Soviet computer scientist Viktor Gluschkov. 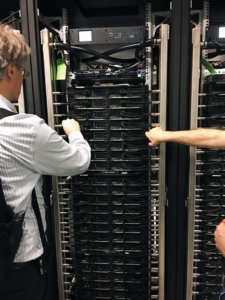 The entire program of the conference can be accessed here. The edited volume with the revised and reviewed selected papers will be published by Springer at the beginning of next year.

On the last day of the conference there was a special event on the agenda at the nearby Poznań Supercomputer and Networking Center (PSNC): A live re-enactment of decoding an Enigma message in Bletchley Park with the help of a replica of the “Bombe.” The Bombe was an early electronic computer co-developed by Alan Turing. The replica worked reliably so that the message could be decrypted. The procedure was accompanied by lectures of Alan Turing’s nephew Dermont Turing and Marek Grajek, the director of the planned cryptology awareness center in Poznań. The whole process as well as the lectures were recorded and can be viewed on the IFIP website “Enigma live“.

Finally, Dr. Cezary Mazurek, deputy director of the PSNC, invited the conference participants to visit his computer center. Founded in 1993, the center replaced the university’s own IT infrastructure and has been providing computing power to research institutes, local administrations as well as citizens and small businesses ever since. It is striking how highly standardized the IT infrastructure has become in the 21st century. Data centers in Lugano, Munich or Poznán are almost completely identical in architecture, concept and appearance, even if their technical performance may differ to some extent. The closed, air-conditioned, buzzing rooms of the digital age can be found in all major cities all over the world. It is their usage in a cultural context as well as their adaptation by software that distinguishes their historical impact.