Event a Tribute to Francois Anceau

On Tuesday 14 June 2022, experts in electronic systems design will gather online and onsite at the Grenoble Institute of Technology in Grenoble, France, to discuss emerging trends and to pay tribute to Professor Francois Anceau, who died in 2020. 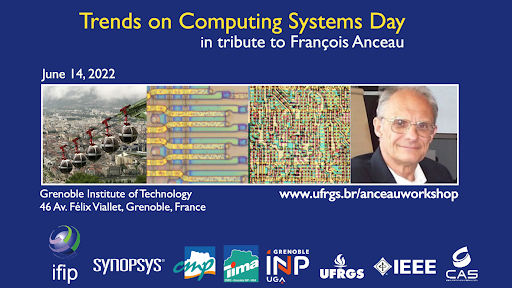 Professor François Anceau was a pioneer in the design and automation of silicon processors and embedded computing systems.

Professor of the ENSIMAG/Grenoble INP Engineering School in the first part of his academic career, he contributed to the creation of a “Grenoble school” on computer architecture in the 70s and early 80s, building a world-wide reputation that has endured until today.

Responsible for the Computer Architecture Group of the former Jean Kuntzmann’s LA7 Laboratory until the early 80s, he was the founder of the CMP (Multi Project Chip) Service in 1981. He was a leader and pioneer in the research and education on microelectronics and his group evolved as part of the TIM3 Laboratory later in the 80s and next formed TIMA Laboratory in the early 90s.

In the mid-80s, he joined Bull enterprise in Clayes Sous-Bois where he led pioneering industrial work on embedded computing systems. He was an outstanding teacher and prolific researcher, completing his academic career at the Ecole Polytechnique in Paris from the 90s to the late 00s.

Extremely enthusiastic and passionate about his field, he collaborated with the CNAM in Paris until his very last days. Anceau was an active member of WG 10.5, and an active contributor to VLSI-SoC, the main conference of WG10.5, since it began in 1981.

As a tribute to the memory and work of Anceau, the event will include talks on the past, present and future of embedded computing systems. Speakers will include internationally-recognised personalities in the field, complemented with testimonials from Anceau’s relatives, colleagues and former students.

While the workshop is free, registration is compulsory for both on-site and on-line participation.