James P.G. Sterbenz received a B.S. in Electrical Engineering, a B.S. in Computer Science, and an A.B. in Economics ‒ minors in Anthropology and Asian Studies ‒ from 1976 to 1980 at Washington University in St. Louis, Missouri, USA. James was later awarded a M.S. and a D.Sc. in Computer Science, in 1986 and 1991 respectively, also from Washington University.

Initially James worked as an engineer for NCR and IBM at various locations (later as an Advisory Engineer Scientist) between 1980 and 1994. He then joined as a Senior Member of Technical Staff at GTE Laboratories in Waltham, Massachusetts, in 1994, moving on to become a Principal Member of GTE’s Technical Staff in 1998 and as a Research Group Manager on Mobile, Wireless, and Active Networking – formally at BBN Technologies – and finally as a Senior Network Scientist. James then moved into academia in 2003 at the University of Massachusetts, Amherst, as a Visiting Research Scientist. After becoming a part-time lecturer at Northeastern University in Boston, James joined the Department of Electrical Engineering and Computer Science at The University of Kansas (KU), at Lawrence, in 2005 as an Associate Professor, where was promoted to Full Professor in 2014. He also had, from 2004, adjunct/visiting professor appointments at Lancaster University in the UK, the Hong Kong Polytechnic University in Hong Kong, and the Chinese Academy of Sciences in Beijing, China. 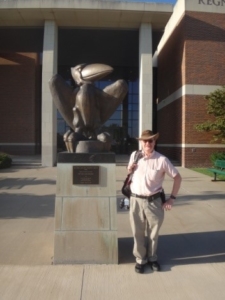 James’ Ph.D. thesis was on “Axon: A Host–Network Interface Architecture for Gigabit Communications”, supervised by Guru Parulkar, indicating his field of future work and research, namely communication networks. James was part of several projects related to high performance networking ‒ notably a TCP project with NASA Glenn and a PetaWeb optical infrastructure. He co-led an innovative project in survivable wireless networks.  Additionally, in collaboration with David Hutchison at Lancaster University he started to work on Active Networks for network management and foreshadowing ideas such as SDN and P4. During the last decade of his active, technically precise, and highly motivated work James focused his research on network resilience.

James was an internationally known expert in key aspects of communication networks, and was an author of two books and over 120 journal and conference papers in the area. We remember James as a wonderful colleague with a passion for research, active in IFIP TC6, with his Nikon camera ready to take photographs, especially of trains and railway signalling.