IFIP Working Group 2.7/13.4, which is focused on User Interface Engineering, held the 2nd Workshop on Charting the Way towards Methods and Tools for Advanced Interactive Systems in Valencia last month.

The workshop accepted 13 position papers, which discussed the challenges faced when designing and developing for a range of application domains, from Smart Environments (such as smart homes) to Human-Robot Interaction or interaction in hyper-connected cars. The use of interaction approaches such as augmented reality or gestures was also discussed. The meeting identified two clear concerns: ensuring the quality of the developed systems (in particular, but not restricted to, when considering safety critical contexts), and the impact of artificial intelligence on interactive computing systems. 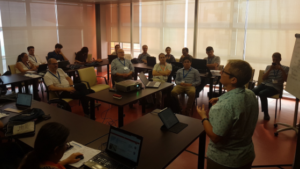 After the presentations, attendees formed breakout groups to discuss the major themes and topics that emerged from the papers. These were then developed into two reference examples, which will be used by the community going forward to highlight the specific problems and challenges identified.

Initial presentations were also attended by participants of the EISM 2019 (Workshop on Research and Practice Challenges for Engineering Interactive Systems while Integrating Multiple Stakeholders Viewpoints) which was also organised by members of the working group. A joint session was held at the end of the second day with participants of both workshops reporting back on outcomes.