Don’t Depend on Cyber to Win Battles

Don’t Depend on Cyber to Win Battles

As the world continues to watch the conflict in Ukraine, retired Australian general, Senator Jim Molan has told an Australian Computer Society (ACS) event that while cyber warfare may be an important part of modern conflicts, military campaigns will still be decided by soldiers with weapons.

“If Ukrainian soldiers did not have shoulder-fired anti-aircraft missiles and they did not have anti-tank missiles, they would have been bowled over in that first week,” Senator Molan said.

“So if someone has the view that the next war will be all about cyber, well they should be trading their ships, planes, tanks, and soldiers and buying computers instead. In my view, you’ve still got to have a balance.”

The senator, a former decorated general before entering politics, admitted his view on the importance of cyber warfare during a conflict was a work in progress and that cyber is more ‘shaping’ than it is decisive.

“By shaping, I mean that it’s something you use not to win a war or conflict; [cyber is] something which sets you up so that other things can then be used to actually have a decisive result,” he said.

Senator Molan has written an upcoming book, the research for which he said greatly helped inform his thoughts on what Australia needs to do to be prepared for war.

“Unless you understand the nature of warfare, how can you say we aren’t prepared?” he asked rhetorically.

“We’ve had 75 years in this extraordinary country where our society’s understanding of warfare has been a few headlines in the paper.”

During the discussion, Senator Molan also pointed out the necessity of the ten-year horizon of the Redspice Cyber Security package, citing the difficulty of building the capability from Australia’s current position.

“It’s a long program. When you try and throw money at any program out very, very fast, you generate wastefulness, and you inflate prices,” he said.

“I’m pretty happy with the fact we’re putting $10 billion into cyber security. Because we’ve got to keep our society working. We’ve got to protect every aspect of how that society works and we’ve got enough problems without having a cyber problem as well.”

The senator, running again for re-election to represent NSW in the upcoming Federal poll, said he could understand the budget decision to axe the Sky Guardian drone program, saying there has to be a balance in spending.

“We have armed aeroplanes, armed ships, and submarines and soldiers,” he said.

“We don’t have an armed drone and, well, that was a decision that others have made.”

The senator also defended the recently passed Critical Infrastructure legislation, pointing out governments have to prepare for the digital equivalents of disruptions, like the recent AdBlue crisis that threatened to stop Australian transport.

“You’ve got to be able to think these issues through,” Molan said. “And we have now started that process through legislation requiring those who know the infrastructure, the operators of the power stations or the pipelines, [to keep it secure].”

“The first tranche of the legislation went through earlier this year, and the second tranche I think has gone through. But both of them moved from a reporting requirement, which not just reported, but stipulated what actions should be taken. And I think that’s the first step in the process.”

The need for industrial self-sufficiency was also a factor raised at the breakfast with the senator saying global uncertainty means we often don’t know the exact nature of the problems we need to solve.

Molan is big on getting Australians to do the heavy lifting when it comes to skills and innovation, rather than looking overseas. For him, the COVID-19 pandemic proved a need to develop and foster the kinds of resources the country needs if it is closed off from the world once more.

“We’ve got to rely on what the Australian people bring to the fight – and they bring innovation and skills in many, many different areas,” he said.

“We’re starting to realise that there is competition between the liberal democracies in this in this world, and the autocracies, the dictatorships.

“So we are in a different world. I think it applies as much to the ability to do R&D and innovation, as it does to companies.”

This article by Paul Wallbank was first published in ACS Information Age. 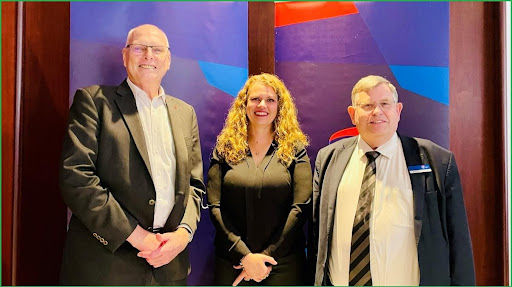