Congratulations to Dr Ken Barker, Derek Burt, Beverley Gooding and Utpal Mangla on being inducted as Fellows by CIPS, Canada’s Association of Information Technology Professionals. The award recognises IT professionals who have made an outstanding contribution to the advancement of the IT profession or industry in Canada.

The Fellow is the highest class of membership offered by CIPS and can only be obtained with approval from the CIPS National Board of Directors. Fellow Members have agreed to uphold the highest standards of ethics and professional conduct. They also help to promote CIPS and the association’s initiatives and causes within their sphere of influence. Fellow Members use the designation “FCIPS” after their name.

CIPS is pleased to induct four new CIPS Fellows and thanks them for their contribution to CIPS and Canada’s IT profession and community. 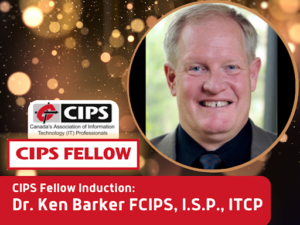 Dr Ken Barker FCIPS, I.S.P., ITCP is a professor of computer science at the University of Calgary. He holds a PhD in computing science from the University of Alberta (1990) and has many years of experience working with industrial computer systems. He has interest in system integration, distributed systems, database systems, and the privacy and security of data repositories.

He has served as the dean of the faculty of science and as head of computer science at the University of Calgary. He is the director of the University of Calgary’s Institute for Security, Privacy and Information Assurance and the president of the Alberta body of the Canadian Information Processing Society (CIPS Alberta). He is a Fellow of the Canadian Global Affairs Institute, a Senior Member of the IEEE, and a Life-time Member of the ACM.

Ken is currently the President of CIPS Alberta and is a past president of the Canadian Association of Computer Science (CACS/AIC) in addition to having served on the Computer Science Accreditation Council.  As the director of research laboratories at the University of Calgary and University of Manitoba he has supervised over 70 graduate students, in addition to several post-doctorates and research assistants. Dr Barker has published over 250 peer-reviewed publications. 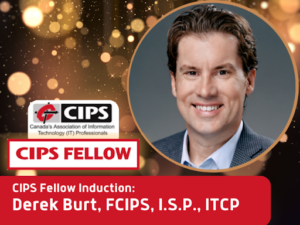 Derek Burt FCIPS, I.S.P., ITCP has been a CIPS member for over a decade and was a long-time volunteer with CIPS in Saskatchewan (including serving as the President of CIPS Regina and a member of the CIPS Saskatchewan Governance Transition Taskforce) before relocating to Alberta in 2013. Derek is currently serving as Acting Treasurer for CIPS Alberta, and has been Chair of the CIPS National Board of Directors since 2017.

In 2010, Derek was awarded the Marilyn Harris Award for IT Professionalism. Derek graduated from a CIPS-accredited computer science program at the University of Regina and has served on numerous private and public boards. 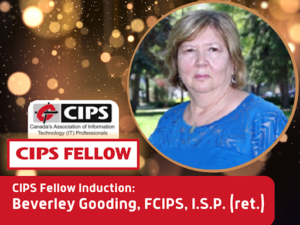 Beverley Gooding FCIPS, I.S.P. (ret.)  has worked in the IT sector since 1970, working at SaskTel, INCO and SGI and retired in 2014. Bev has been a CIPS member and I.S.P. Certification holder since 1991 and has held many positions in CIPS over the years on both CIPS Saskatchewan and CIPS National, including being on the CIPS National Board of Directors from 2001 – 2008 as a Regional Director and National Student Director.

In CIPS Regina (a former section of CIPS Saskatchewan), she was co-Chair of the Programming Committee, Regional Director, Vice-President, President, and Chair of the annual conference, Spring Seminar.

Bev noted: “Personally, I am very grateful for the opportunities I have been provided while working with CIPS. I have developed and enhanced various skills which have helped me personally and with my career eg, project management, working with volunteer staff, interviewing, mentoring, learning nuances of dealing with government, etc.” 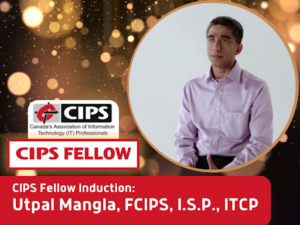 Utpal has been with IBM (and PwC) since 1998. With 20+ years of experience, Utpal is a highly motivated & dynamic leader who thrives in challenging environments. He is reputed for his trust, problem solving and organizational skills. Recipient of numerous client excellence awards, he is recognized as “IBM Top Talent”.