Former CIPS President, Bashir Fancy, sat on an Advisory Board for the event and participated in a panel focused on “Creative Approaches to Filling the Skills Gap”, joining colleagues and peers from across North America to address a burning issue facing all ICT employers. 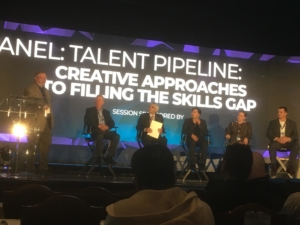 Bashir paid tribute to the event organisers, saying it was, “very well attended, had good speakers and content, including panel discussions … and there was a lot of networking and excellent discussions over the 2/3 days”.

The session was moderated by Rushmi Hasham from Rogers Cybersecure Catalyst at Ryerson University, who facilitated discussions around the challenges faced by women in the profession, while also acknowledging successes of the individual panellists. The panel also weighed in on ideas on how these challenges can be addressed. One point which resonated strongly with the audience was the need to provide “sponsors”, rather than “mentors” when developing careers for female employees; someone who will stand up and defend/promote as opposed to just teach, as more women entering the cyber security profession are forging a path to management.

The conference closed with a presentation by Tanmay Bakhshi, a 15 year old AI and Machine Learning Systems Architect who has presented at TED and keynoted at numerous conferences around the world for the United Nations, IBM, Apple, KPMG, SAP, NASSCOM, The Linux Foundation, and Walmart, just to name a few. His first major keynote address was at IBM Interconnect 2016, where he presented his algorithm “AskTanmay,” which is the world’s first web-based natural language question answering system to be powered by IBM Watson. Tanmay’s passion lies in developing machine learning and AI-based systems, mainly in the fields of healthcare and education, where he believes this next generation technology can make the biggest impact.

His YouTube channel, Tanmay Teaches, is where he shares his research and knowledge with audiences of all ages. He loves to interact with, respond to, and help people with their queries and hence, has been honoured with a Twilio Doer Award, Knowledge Ambassador Award, Global Goodwill Ambassador at LinkedIn, an IBM Champion for Cloud and a Google Developer Expert for Machine Learning.